A Chicago Restaurant Where Indian and Chinese Influences Meet 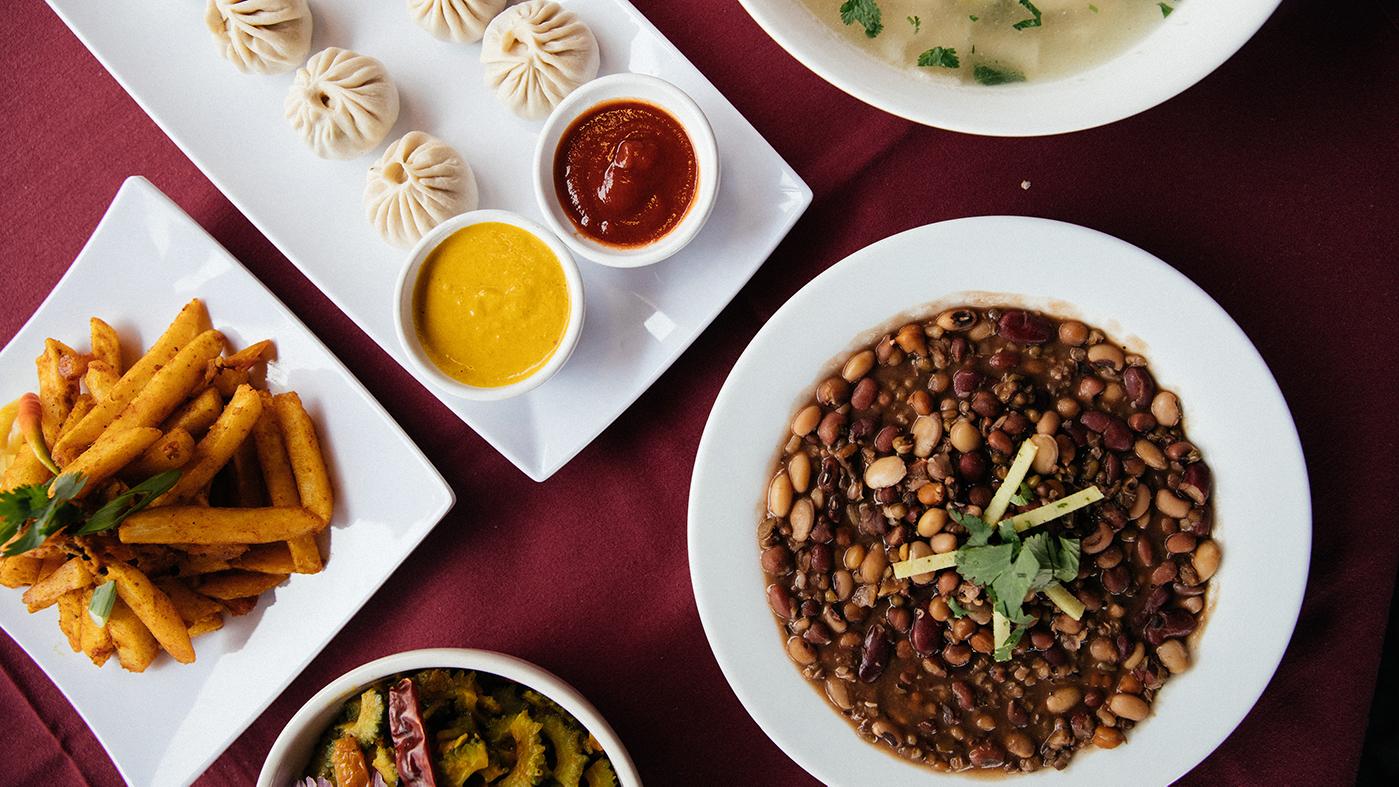 Find stories about some of Himalayan Sherpa Kitchen’s neighboring restaurants and information about a food tour at wttw.com/nopassportrequired.

There are a number of restaurants in Chicago that are supposedly Nepali, but almost none of them serve much food that actually comes from the mountainous, landlocked country northeast of India. Instead, most offer a wide range of what most Westerners know as Indian dishes—butter chicken, curries, naan—with only a few options from Nepal itself.

But Himalayan Sherpa Kitchen, which opened at 2701 W. Lawrence Avenue in Lincoln Square earlier this year, inverts that trend. Rather than serving mostly Indian dishes with a few Nepali specialties scattered in, it does the opposite. While it offers stalwarts like chicken tikka masala, lamb vindaloo, and paratha, the majority of its menu is taken up by dishes like the hearty nine-bean stew kwati, the hand-cut noodle soup thenthuk, and the half-moon hand pie sephaley, which is stuffed with spiced chicken and peas and lacquered with ghee (clarified butter).

“Some people call sephaley empanadas, but no, this is Tibetan,” says Raj Thapa, one of four co-owners of Himalayan Sherpa Kitchen. 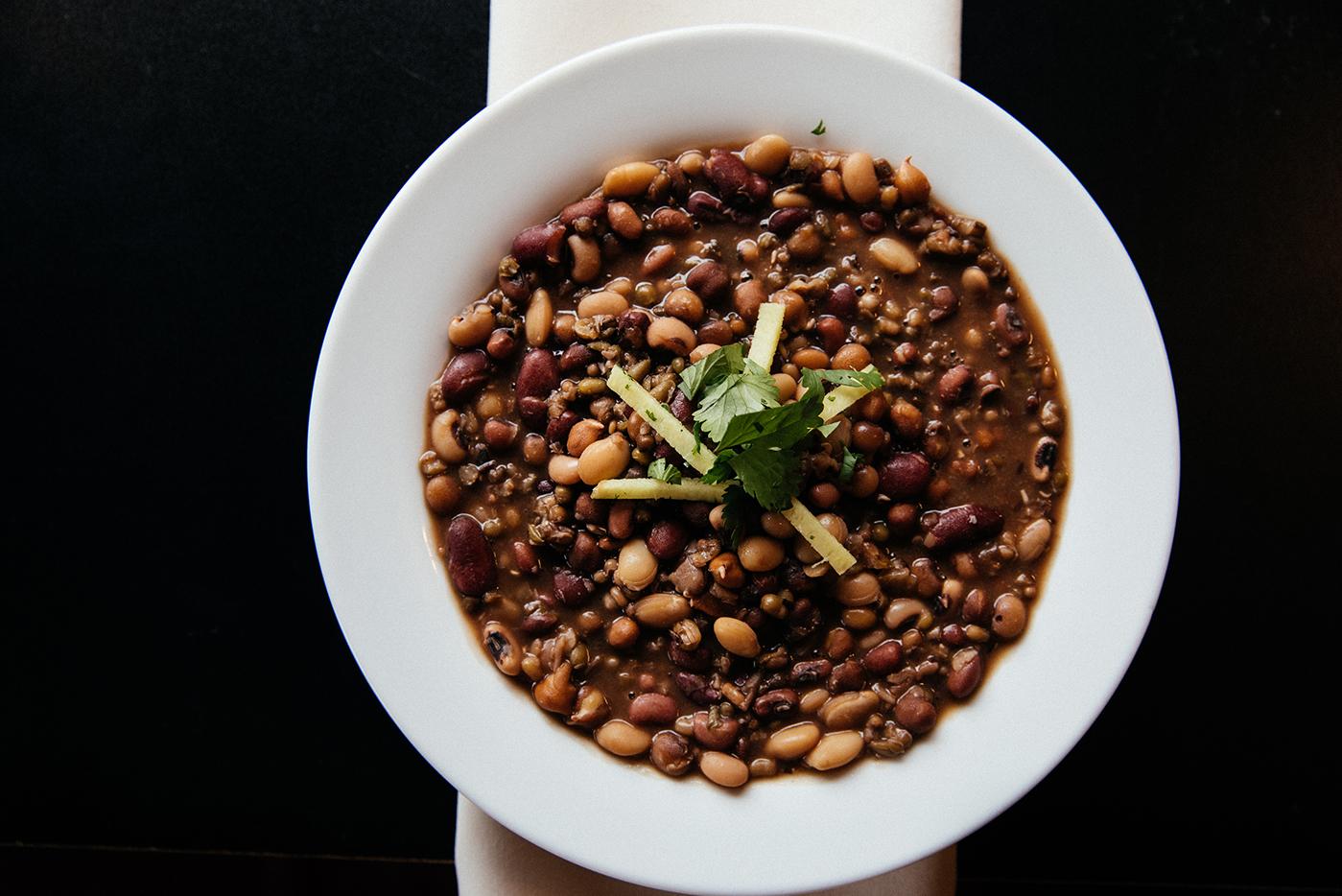 The nine-bean stew kwati is a Nepali specialty that is hard to find in Chicago. Photo: Sandy Noto for WTTW

Tibet, along with Nepal’s other neighbor, India, has a strong influence on the cuisine. “To the untrained eye and a palate unaccustomed to South Asian food nuances, Nepali cuisine may mistakenly seem to be just like Indian or other South Asian cuisines,” writes Anupy Singla, the Chicago-based author of several cookbooks of Indian recipes, in an email. “On the surface, it also offers rice, spiced lentils, flavorful, dry vegetable dishes, and spicy pickles and other condiments. But, it also includes a variety of unique flavors as a result of the country’s geographical location between India and China. Nepali cuisine is directly influenced by Tibetan food traditions, [as Tibet] is just to the north. There is also quite a Chinese food influence on Nepali cuisine in the form of noodles and Chow Mein.”

“The country is very small, but you can find all kinds of weather even in a single day, and that changes our food,” says Thapa. “That’s why our menu is kind of long: one page represents Tibetan food, one is typical Nepali food, and one is similar to Indian food.”

The four co-owners of Himalayan Sherpa Kitchen are all Nepali, but met in Chicago and hail from different regions within their native country. Thapa is from the city of Pokhara, a tourist center in the middle of Nepal. The restaurant’s chef and co-owner Bhim Rai is from northeastern Nepal, while the other two co-owners are from areas more strongly influenced by Tibet. “We are all from different parts of our country, so we know the cultures, traditions, and the foods,” says Thapa. 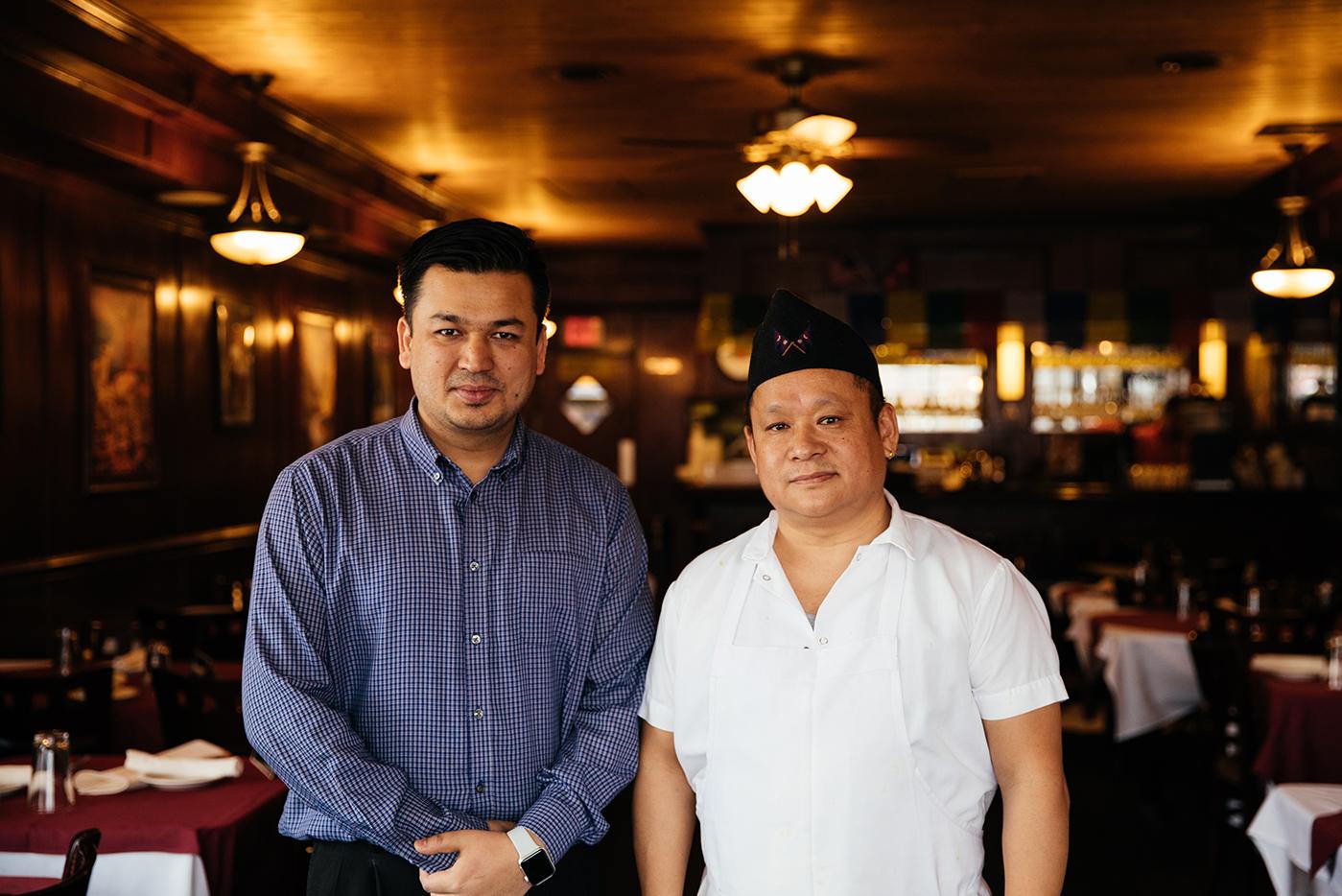 One of the more popular of those traditional foods is the momo. A Tibetan-style dumpling stuffed with richly spiced meats or vegetables, it’s an illustrative example of the main culinary influences on Nepal in a single dish: the dumpling wrapper and preparation are reminiscent of Chinese dumplings, while the spices used in the filling are closer to Indian food. Momos have recently appeared on several menus in Chicago. Thapa is particularly proud that Himalayan Sherpa Kitchen’s are handmade every day. “We make them from scratch, it’s not regular wrappers that we could find,” he says.

He also points out the numerous bone-in meat dishes (“boneless chicken is like just a boiled potato,” he says, although the popular Nepali dish chhoila’s boneless chicken is much more flavorful than that, given its spices), and emphasizes the rarity of ghundruk ko achaar – fermented, spiced mustard greens beloved in Nepal as a side. “Mustard greens are kind of hard to find here,” he says. “We specifically order it very fresh, dry it in the sun, and mix it with spices in a long process.”

Given the high altitude and cold temperatures of much of Nepal, agriculture is limited: mustard greens, in addition to potatoes, are some of the only things that can easily be grown in more mountainous regions. The difficult climate contributes to the unique combination of spices found in Nepali cooking, including cumin seeds, turmeric, and coriander from India, and Sichuan pepper from China, according to Singla. “Few spices could traditionally be grown in the Himalayas, and thus the cuisine developed using the spices that were and are most accessible, making for a very interesting and delicious cooking tradition,” she writes, noting that Nepali food tends to be “less fiery” than neighboring North Indian cuisines. 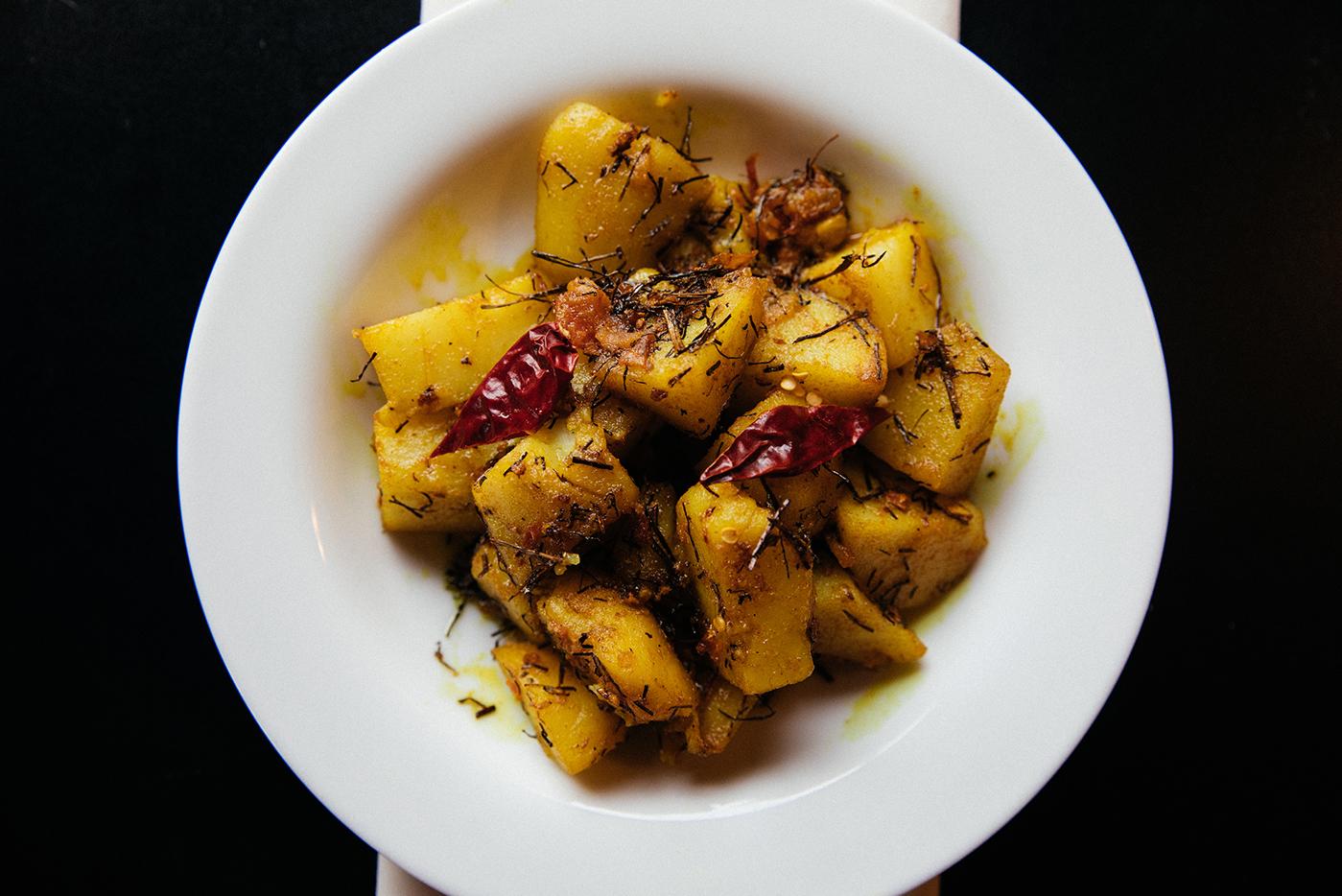 Given the high altitude and cold temperatures of much of the country, potatoes, like this preparation called jimboo aloo, are common in Nepal. Photo: Sandy Noto for WTTW

And while Himalayan Sherpa Kitchen does have many of the curries that people in the West tend to associate with South Asian food, it also has some that are more specific to Nepal: a pumpkin curry; one featuring fresh bamboo shoots; and karela, bitter gourd in a spiced tomato sauce.

Thapa, aware of prevailing food trends in the United States, likes to point to these and other dishes as being particularly nutritious and healthful, as well as being organic and vegetarian. He is an avid entrepreneur, eager to master the business he has worked in for most of his life. His first job, as a thirteen-year-old, was in tourism in his native Pokhara. He eventually studied in London, receiving a master’s degree in travel, tourism, and mass communications. After following his wife, whom he met in Nepal, to Chicago, he found work at a hotel. “I was always watching closely, trying to learn,” he says. Even at his own restaurant, he continues to be a student, learning recipes from Rai in the kitchen. “Let’s see how far I go,” he says.

Rai himself has worked in the restaurant industry for twenty-one years, including at various Indian restaurants, while the other co-owners also have a background in the industry. “We all met in Chicago and said, ‘Why not, let’s take a challenge, to bring Nepali foods here,’ ” Thapa says. “Nobody knows Nepal or what the food’s about – it’s a very small country. But we took a challenge.”

The restaurant itself does its small part to give people unfamiliar with Nepal an impression of the country. The dining room’s dark wood-paneled walls – the location used to be a Bosnian restaurant – showcase images of snowcapped peaks and icy blue mountain lakes, while Tibetan prayer flags hang over a bar in the back. 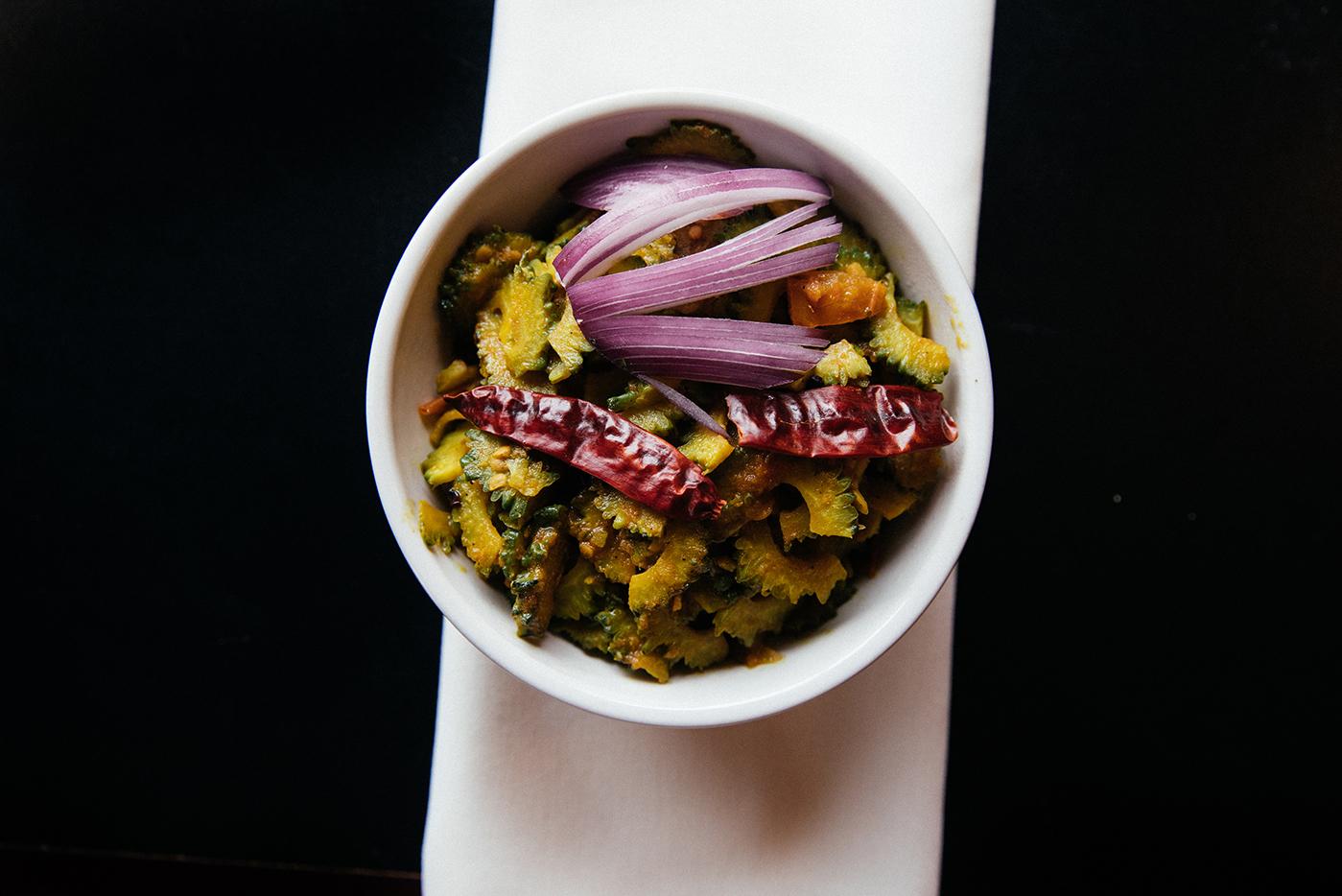 Some Nepali dishes like karela, bitter gourd in a spiced tomato sauce, are similar to Indian curries but specific to Nepal. Photo: Sandy Noto for WTTW

The first Nepali immigrants came to the Midwest in the early 1960s, according to the Nepali American Center. The population has increased steadily in the past two decades, and is now estimated at more than 7,000, with many in the Chicago area – the Nepali American Center is based in Mount Prospect. That growing community needs places to eat the food of their home country, as Thapa says. “They come here to support us, and also try, because sometimes you feel like, ‘Let’s try our food,’ but there aren’t many restaurants, so they have to come here.” (He and his partners plan to open another location early next year in Highland Park.)

Singla sees the recent emergence of Nepali restaurants like Himalayan Sherpa Kitchen as part of “a larger trend of more specialized cuisine in the South Asian diaspora,” she writes. “In the two decades that I have lived [in Chicago], I have seen the representation of South Asian cuisine go from minimal at best to one that is finally thriving and getting its due recognition.”

“If people haven’t tried Nepali food before, you don’t need to go to the mountains,” Thapa says. “Please come and try. Not everyone will like it, because all peoples have different flavors. But this is ethnic food.”

Every culture has its own unique palates, food that reminds them of home. Thanks to people like Thapa, Rai, and their partners, more and more of those dishes are available for expatriate members of those communities to enjoy and Americans outside those cultures to try, lovingly presented by immigrants proud of both the homeland they came from and the new one they found.